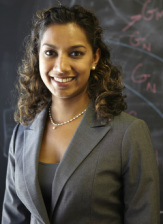 Saniya LeBlanc's research goals are to utilize nano- and micro-structuring techniques to improve energy systems.  She uses scalable manufacturing techniques to create nanostructured materials for energy and thermal management applications and creates techno-economic models for emerging energy technologies. Dr. LeBlanc obtained a PhD in mechanical engineering with a minor in materials science at Stanford University.  She earned her BS with highest honors from Georgia Institute of Technology and a Master's of Philosophy in Engineering from Cambridge University as a Churchill Scholar. Dr. LeBlanc has received fellowships from the National Science Foundation, Sandia National Labs, and Stanford's Diversifying Academia, Recruiting Excellence program. With a strong commitment to educational equity, she served in Teach For America as a high school math and physics teacher in Washington, D.C., and she was co-founder of the American Society for Engineering Education's Stanford chapter. Dr. LeBlanc joined GWU from Alphabet Energy, a San Francisco Bay Area startup company, where she created research, development, and manufacturing characterization solutions for thermoelectric technologies and evaluated the potential of new power generation materials.

Dr. Vijay Ponnambalam (Ponns) is a postdoctoral Scientist. Materials synthesis is his passion, particularly in thermoelectrics, which demand to combine glass-like heat transport with electrical transports of crystalline materials. The challenge here is processing and he is always motivated to synthesize materials with cutting-edge properties by processing. Ponns can be reached at vpon@gwu.edu.

Dr. Cagri Oztan received his PhD in mechanical engineering from the University of Miami. He joined the LeBlanc Lab in 2021 as postdoctoral researcher where he is currently investigating the process-structure-property relationships of laser additive manufactured thermoelectric materials and high entropy alloys.

Ryan Welch received his M.S. in Mechanical Engineering from GWU in 2020. He is a current DoD SMART Scholar and researches laser additive manufacturing of high-temperature thermoelectric materials. Ryan currently interns for NSWC Dahlgren Reentry Systems Office where he performs modeling and simulation of high-temperature composite materials. His research interests lie at the intersection of materials science and additive manufacturing of refractory materials.

Rachel Gray received her B.S. in Mechanical Engineering from GWU in 2020. She is currently a graduate student working on integration of renewable energy and storage into district energy systems.

Benedict Vergara received his B.Sc. and M.Sc. in Electrical Engineering at The George Washington University in 2019 and 2020, respectively; both with concentrations in Energy and Power Systems. Since graduation, Ben has worked at the engineering consulting firm Strategic Analysis, Inc. as a staff engineer aiding the development of techno-economic analyses for clean energy technologies. Now, Ben is a graduate student returning to deepen his understanding of how powerful tools, such as machine learning, artificial intelligence, and blockchain technology can offer reliability, resiliency, and efficiency to the cutting edge of smart grids.

Tripp Griffith received his bachelors of science in mechanical engineering from GW in 2020. He is currently continuing as a student in the 5 year masters program for mechanical engineering with a concentration in Fluid Mechanics, Thermal Sciences, and Energy. Over the past summer Tripp worked at Baumann Consulting, an engineering consulting firm focused on building commissioning and auditing. To go along with his work on district energy systems in the LeBlanc Lab, he is also engaged in the university thermal fluids lab.

Tyler Wyka is pursuing his B.S. in Mechanical Engineering with an expected graduation date of 2024. His research interests are in energy and power systems with a focus on sustainability and equity.

Dr. Haidong Zhang received his PhD from the University of Florida. After working as a postdoctoral researcher at the Carnegie Institution of Washington, he joined the LeBlanc Lab in 2017 and worked on novel, laser-based manufacturing and characterization of thermoelectric materials.

Dr. Ahmed El Desouky received his PhD from the University of California San Diego (Joint with San Diego State University) in May 2012. Following his PhD, Dr. El Desouky was a postdoctoral researcher at San Diego State University's Advanced Materials Processing Laboratory where he worked on combustion synthesis of alloys. From 2012-4, he was an assistant professor of materials science and engineering at Egypt Japan University of Science and Technology.  Dr. El Desouky joined the LeBlanc Lab in March 2014; his research was focused on novel processing and manufacturing techniques of nano-structured materials. He now works at Eaton as an Aerospace Additive Manufacturing Specialist.

Dr. Stephanie H. Johnson received her Ph.D. in Materials Science and Engineering from Drexel University in June 2013. Dr. Johnson's doctoral research focused on the influence of size, shape, and interfacial coupling on the physical properties of single-component and core-shell multi-component nanostructures. Upon completion of her Ph.D., Dr. Johnson worked for Croda, Inc. investigating the applications and scalable production of nanomaterials. Dr. Johnson joined the LeBlanc Lab as a Visiting Scholar in 2014; her work investigates how material properties can be maintained in large scale, cost effective manufacturing methods.

Michael Orrill completed his PhD in the LeBlanc Lab in 2019. He works at NextFlex.

Nicholas Batista is a Master's student at the George Washington University, pursuing a degree in Mechanical and Aerospace Engineering. His current academic and research endeavors focus on Fluid Mechanics, Thermal Sciences, and Energy. Nicholas graduated with a BS in Mechanical Engineering at GWU in 2013. During his undergraduate studies, he performed computational nano-materials science research while also gaining manufacturing work experience.

Michael Carter is currently pursuing a PhD at Columbia University. He received a master's in Mechanical Engineering at The George Washington University and a bachelor's in Mechanical Engineering from the University of Maryland. Michael worked as a Junior Mechanical Engineer for Computer Sciences Corporation where his work focused on the design of mechanical systems for U.S. naval vessels. Michael also worked as a Clean Energy Fellow at Technology Transition Corporation where he supported the Hydrogen Education Foundation's Hydrogen Student Design Contest. His research interests are in energy production, nanomaterials and scalable production of nanomaterials and nanomaterial based devices.

Maryam Zahedi received a Master of Science in Mechanical Engineering from Florida International University in July 2013. From 2005-10 she worked on clean industry innovations in cement industries. She received her Bachelors of Science in Mechanical Engineering from Shahid Chamran Unversity in February 2005. Her research interests are in heat transfer systems and nano -structured materials.

Adam Read is a mechanical engineer in the Electric Boat division at General Dynamics in New London, CT. He obtained his master's degree from The George Washington University's Department of Mechanical and Aerospace Engineering in 2015. He received a Bachelors of Science in Chemical Engineering from Brigham Young University. Before joining GWU he worked as a proess engineer for Rio Tinto where he worked on mineral flotation and water treatment technologies. His research interests are in mechanical systems, manufacturing processes, and plant design.

Jim Tronolone is a junior at The George Washington University majoring in biomedical engineering. His current research was focused on colorimetric sensor fabrication using biological materials in ink-jet printing. His research interests lie in the applications of nanobiotechnology, including the engineering of biomolecules and the design of bio-inspired systems. He received the NSF Graduate Research Fellowship and is pursuing a PhD at Texas A&M.

Joseph Crandall double majored in computer science and physics, and he earned his bachelors degrees in 2017. He currently attends graduate school in GW's electrical and computer engineering department.

Mattie Watson graduated with a bachelors of science in Mechanical Engineering. She researched the properties of bismuth telluride to be used in selective laser melting. ﻿

Scott Barnes is pursuing a bachelors of science in mechanical engineering with a robotics concentration at The George Washington University. He investigated the spreadability and flowability of powders used in selective laser melting. His research interests include automated manufacturing techniques and processes, such as additive manufacturing and collaborative robotics.﻿

Trevor Olson graduated with  a bachelors of science in electrical engineering at The George Washington University. He worked on a research project focusing on the production of photovoltaic cells using nanofabrication techniques.

Lindsay Ryan graduated with a degree in Systems Engineering and Computer Science at George Washington University. She researched manufacturing and production costs of thermoelectric generators in the LeBlanc Lab. She is pursuing graduate school in Germany.
﻿﻿

Ellise Damschroder graduated with a degree in mechanical engineering and a concentration in aeros﻿﻿pa﻿ce from The George Washington University’s Department of Mechanical and Aerospace Engineering.﻿﻿ She is currently pursuing a master's degree at Stanford University.

Bridgette LaFaye graduated from Woodrow Wilson High School in June 2014. She is pursuing a degree in materials science and engineering at the University of Illinois at Urbana-Champaign. She worked on a research project on the costs of thermoelectrics and manufacturing in Summer 2015.

Melina Minhas reentry graduated form Loudoun County High School in June 2014. She is pursuing a degree in business in the fall. She worked on a thermoelectric manufacturing cost project in Summer 2014.

Jena Barnes completed an undergraduate research project on synthesis and thermoelectric characterization of zinc oxide nanowire films. She earned a BS in materials science and engineering from Stanford University and is currently pursuing a PhD at Duke University on a graduate research fellowship.

Maneeshika Madduri completed an undergraduate research project on thermal characterization of zinc oxide nanowire films using the 3-omega technique. She earned a BS in electrical engineering from Stanford University. Maneeshika worked on a solar technologies project in Nepal on a Fulbright fellowship then went to Sandia National Labs.
Proudly powered by Weebly